PB at PM thanks to SSS.

I know the title of this post seems a bit weird, but read on and you'll be able to figure it out.

I just scored a personal best at one of the races I usually suffer at. In fact, I gave Powerman a miss last year because the mere thought of suffering through that second run was enough to make me wish I'd never started running. But for some inexplicable reason, I let my mouse wander over the registration button on the Powerman website and clicked it. Next thing I know, I'm registered for this year's event.

This year, I had the bonus of having my kids, Shafeeq and Shaqeel, come watch me race. And Senn was more than happy to give up racing to help babysit them while I was out there suffering.

Having them there really made a difference. For one thing, I didn't want them to see me fail again like what happened in Langkawi this year. So that gave me an extra incentive to do well. For another, having them there made it feel like we were on holiday, so I was completely relaxed the night before and didn't feel any pressure. And also, having them there made me want to hurry back to the stadium so I could see them and I knew the boys were going to be restless waiting, so I knew I needed to hurry through the race to save them from prolonged restlessness! 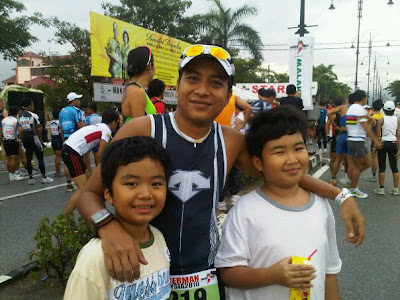 Shafeeq and Shaqeel with me at the start.
I was one of the last ones to start the race because I was giving instructions to the boys to listen to Senn when the gun went off. The first run was in cool conditions from the rain that just stopped. Within the first k I found Azmar and Fadil, so just paced with them throughout. We were running a decent pace, about 5:45min/km which may have been just a bit too fast, but I felt good and we continued. At the end of the first loop, there were Senn, Shafeeq and Shaqeel waiting for me. Boys looked quite happy to see me and that made me feel good. High-fived them and it was off for another loop. Another half an hour before I see them again.

More of the same on the second loop and we finished the run in one hour flat. A little faster than I had intended but it was ok. Off with the running shoes, on with the helmet and grabbed the bike. And there, at the bike exit, were the best support crew in the world: Senn, Shafeeq and Shaqeel. Another round of high-fives and I was off on the bike. One hour before I finish the first loop and see them again.

The first loop was pretty uneventful. Was going at a steady clip of about 32-36km/h. Legs felt good, aero position felt good. Got over the bridges without drama and headed back. Azmar passed me going up the bridge and I just couldn't hang on to him. But no big deal, just run my own race. Fadil, too, passed me on the way back to Manjung and again, I didn't even attempt to chase. Got back to the stadium and saw the boys and Senn again. Gave them a wave and I was off on the second loop. Another hour before I see them again. 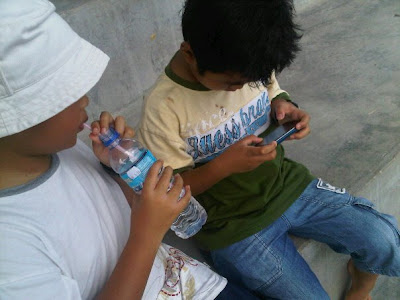 Really getting into the spirit of the race!
Second loop wasn't so smooth. I could feel my calves starting to cramp up. Squirted some water on them and the cramps went away. Then I heard a thud behind me and AJ yelling I'd dropped something. At first I thought it was a water bottle, so I went on since I didn't really need that. Turns out it was my gel flask. That I need! So had to stop, lay the bike down, and run back the 20 or so metres to retrieve the bottle. Cost me a minute or two and about 10 riders passed me. Got back on the bike and it took a while for my legs to get back into the rhythm. Once I did, I caught up with the riders who passed me and was going back and forth with this lady on a Cervelo S2, being careful to stay out of her 7m draft zone. We were like this all the way back to T2. I gave it all I could since I knew my second run was going to be screwed anyway, thanks to the cramps that were developing in my legs.

After 2h07m I was back in transition. And as usual, there were my SSS (Senn, Shafeeq and Shaqeel) support crew out by the run exit. Gave the boys a quick hug (much to their disgust!), and I was off for the second run. Senn told me she was going to take the boys back to the car to rest. That was my cue to try and finish as quickly as I can. Wouldn't want the boys to get too restless.

The first km was quite tough and I was thinking, "Oh no! Here we go again! This is why I don't like to do Powerman." The crampy feeling had moved up to my thighs and it was getting really hard to run. But I refused to walk, walking would have been the end of it and the SSS support crew would have to wait two hours for my return. Not gonna happen. So I shuffled along to the first water station where there was a medic holding up that spray, so I told him to give me everything he's got. I swear that's a miracle spray because after that, the pain was gone. I just had to tell myself to run to the next water station, take a drink, then run to the next. And that's what I kept doing. Saw SSS by the car at the end of the first loop and gave them a wave. By now my pace was between 6:15-6:30min/km. All I had to do now was maintain this pace and I'll be able to see SSS in half an hour. 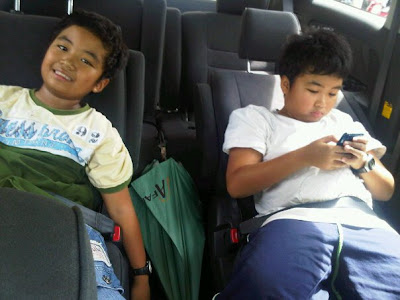 Waiting for their slow-ass dad to finish the race.
It's quite amazing what the mind can do. By now, the sun was out in full force, and my legs were getting really tired. But I just kept telling myself to run to the next station, run to the next station, run to the next station (it also helped that there were more water stations this year!). My mind refused to let me stop and walk. Just wanted to go see SSS as quickly as I could. And before I knew it, I was rounding the final corner and heading into the stadium. As I turned into the finishing chute, I saw, just beyond the finish line, SSS. It was all I needed to pick up speed and cross that line. Nailed the second run in 1h06m for a total time of 4h17m. A PB by half an hour. 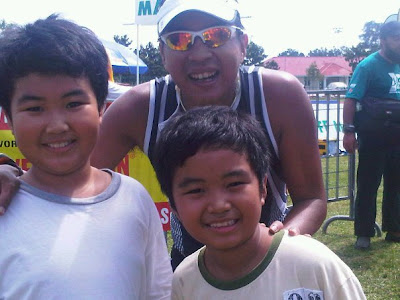 Finally! Can we go home now???!!!
And I owe it all to having the boys there and to Senn for having to put up with their restlessness. Please forgive her if she wasn't as chatty as usual, she had to put up with my boys' boredom. And that was not an easy task to do. Thank you, baby, for putting up with that so I could go racing. I owe you big time!

In case you haven't figured out what the title of this post means, it means Personal Best at PowerMan thanks to Senn, Shafeeq and Shaqeel.
Pictures courtesy of Senn.
Posted by tryathlete at 2:32 PM

SSS was there alright from start to finish. :) Well done bro. The timing is great and something i will look forward to within the next 1 or 2 years.

Glad u had fun with the whole family which I look forward to do with my kids within the next 1 or 2 years :)

Great kids you have there Arif,...and congrats for your PB

As for all the outstation races, I always bring my support crew (my wife and both daughters) along. Although it can be stressful traveling with my young kids but its all worth it when we let them witness the true spirit of a sportsman. Achievements don't come easy.